Introduction to The Future 101

As the Cultures of Affluence emerge and claim cultural sovereignty over their quantized geographic domains two important trends will emerge. The first is that, as food production transitions to volume farming, vast tracts of land will be taken out of agricultural production. The second is that an intercultural argument will emerge over the stewardship of these lands. The three primary uses will likely be

The government owns about 40% of the available land in the U.S. While it is difficult to find compilations of government land ownership in other nations, it is assumed that it is relatively high in most locales. Crown Lands, in the Bahamas, for example, is an extremely high percentage of non-urban lands. In many cases, this land is currently leased for specific use, such as forestry or cattle grazing.

As the Information Age system emerges, the land owned by nation states will become problematical. Many of the emerging Cultures of Affluence will petition for ownership, either collectively or individually, not for the purposes of developing communities or for agricultural use but rather to provide stewardship in a manner consistent with their cultural values. The differences in values, especially between the Gaian perspective of natural ecosystems and the more traditional landscaping and gardening perspectives, will lead to a persistent conflict that will need to be mediated in intercultural settings. The Estate Communities will, for the most part, naturally fall on the interventionist side of the argument.

The purpose of this paper is to explore the future of Engineered Biodiversity. It is in its infancy, to be sure. Current examples mostly come from the plant kingdom where, over the centuries, two or three progenitor plants, as in roses, orchids, peonies, etc., have exploded into hundreds, even thousands, of varieties and cultivars. In fauna, most of the diversity has been for the purposes of improving agriculture. However, in cats, dogs, rabbits, etc. some engineered biodiversity has been primarily for its aesthetic value.

Very few parks have engaged in significant engineered biodiversity. They may encourage squirrels or rabbits, they may have Koi in a pond and, of course, they choose trees, bushes and flowers in an effort to maximize the aesthetic appeal of the park. Typically lawns, quite unnaturally under well spaced trees, create a human friendly environment. The limitations of implemented engineered biodiversity has primarily been the result of budgetary constraints. However, there are also technological limitations. Very significant are cultural limitations. In other words, when the dominant cultures are characterized by concerns from the lower Maslow levels, appreciation of nature as art is limited. 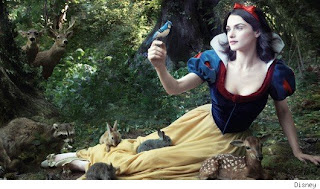 We consider the 'Snow White' archetype to be highly informative. The forest is a place with nice clean places to lounge, ample cute and harmless small animals and lots of birds and butterflies. Flowers abound in an explosion of diversity. Everything is as beautiful and refined as the girl and everything is harmonious.

In other words, this is an aesthetic creation by Disney Studios not a representation of a place that ever existed. If it was ever actually made, the weeds would quickly take over, the rabbits would reproduce out of control and eat all the beautiful flowers. In other words, it would require constant attention and upkeep or it would revert to something natural and inherently less aesthetically pleasing to most people.
.
The emergence of advanced robotics and A.I. , the income explosion it will create and the Cultures of Affluence that will result from both will change the dynamic. People will have both the interest in such environments and the financial wherewithal with which to indulge it. It will become a core identifier for some cultures of affluence such as Polymathica.

A typical park in the North American or European temperate zone may have a dozen indigenous butterflies and perhaps two dozen birds. Animals are often limited to no more than one or two, usually squirrels and something else. This is actually a little more biodiversity than is normal because the park has planted a wider variety of trees, shrubs and flowers than occurs naturally. Most of the birds and butterflies are small, brown and unobtrusive. In other words, they don't contribute significantly to the aesthetics of the park.

There is a clear opportunity for creatives and technologists to create the varieties that can be used as the pallete for the designers and managers of engineered biodiverse park land. It is assumed that butterflies will be shipped as crysalids and birds will be shipped as young. Both will be sterile so that the designers will not run the risk of losing control of their ecosystem.

Birds and butterflies will be bred to be large, beautifully colored and to have gregarious habits that will assure their visibility to the casual observer. One can imagine deer bred to remain fawns, small, and tame. One can also imagine miniaturized animals, such as five foot tall giraffes and 100 pound bears. Last, animals that never were may be bio-engineered, such as unicorns and dragons.

For many cultures it will be the norm for there to be an Ecology manager whose job it is to maintain their boutique village to specific biodiversity parameters. Future geniuses, after the heritage of Capability Brown, will create master plans for communities. They may also, as a work of art, set aside a few thousand acres and create an ecological wonderland that enthusiasts and fans may visit. Lastly, as a service to the families of the Estate communities, the lands of many residents will be designed and maintained by a master planner as an ecological wonderland.

There will emerge enterprises that specialize in developing and producing flora and fauna for use in engineered biodiversity areas. They will likely specialize to type of flora and fauna and, perhaps, to specific Cultures of Affluence, such as temperate zone seed eating birds, or large garden butterflies or mythical Gothic miniatures, etc.

As this pattern begins to emerge in the 2020's it will be, initially, rather subdued. However, as the field of genetics advances and Information Age tastes mature, over time both urban areas and rural park lands will become progressively more fantastical. As this happens, the argument between the Gaians and the Engineered Biodiversity camps will become more heated.
Posted by Michael's Resume at 4:05 PM 1 comment:

The Future 101 Abstracts is available in E-book form. Until Amazon gets their formatting, it can be downloaded for free. Feel free to pass it around. The message is more important than the revenue. Click here to download

Polymathic Institute Fellows receive on ongoing graduate level education on The Transformation, leading to an objectively supportable world view and a superior knowledge of futurity. It is essential intelligence for entrepreneurs, technologists, creatives, intellectuals and investors who want to capitalize upon the opportunities presented by the emergence of the global Information Age civilization.

What Members and Fellows Say

"Mr. Ferguson is a cross-disciplinary luminary who walks the talk. His breadth of interests, brilliance, passion, and humility make communications both revealing and revolutionary.

He has challenged my core beliefs in a non-threatening way that has allowed me to reach, revisit, and revise depths of insight I had forgotten existed, or how to unlock. I can honestly say that our time together ranks among the most important of my life."

"I find Mr. Ferguson's work to be both brilliant and daring."

"Mr. Ferguson is about 10 years ahead of everyone else on the planet Even Kurzwell and Diamantis should be reading his stuff" Vic Jasin